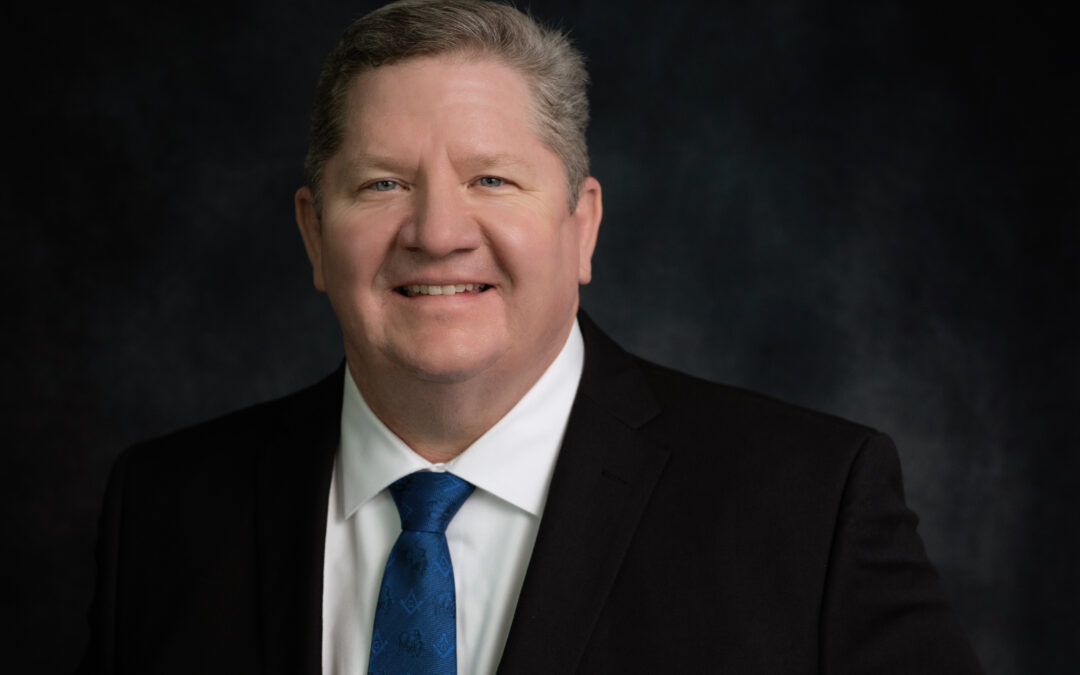 Worshipful Brother Jay Darrow was raised in Edgemont, SD and graduated from high school there in 1988. He joined the U.S. Air Force and departed for Basic Training in July that same year. He served ten years as an Airborne Radio Operator, in SD and Oklahoma until he separated in 1998. After the military he started his electrical apprenticeship in Oklahoma City becoming a journeyman electrician in 2002 and rose to general foreman/superintendent. He has coached wrestling, baseball, and as a baseball and fast pitch softball umpire across various levels. He is currently a Maintenance Electrician at the VA Black Hills Medical Center in Hot Springs, SD. He lives with his wife Katie in his hometown of Edgemont adjusting to life as empty nesters with their two sons starting their own adventures.

WB Jay’s Masonic adventure began in McLoud, Oklahoma in 2002 where he was initiated, passed, and raised to the sublime degree of Master Mason. Immediately after he turned in his proficiency lecture in the Master Mason degree, he was presented with his “C” Certificate card and was awarded the Grand Master’s “Esoteric Achievement Award” for memorizing all the unwritten work of the Masonic Ritual of the Grand Lodge of Oklahoma within 12 months. He was installed as Worshipful Master of McLoud Lodge #126, McLoud OK, in January of 2006. He was able to confer all three degrees and gave the Middle Chamber lecture in the Fellow Craft degree, as well as several parts in the second section of the Master Mason degree. He travelled throughout Oklahoma performing degree work and learning all he could about the Craft. WB Jay also helped during the Schools of Instruction.

While in Oklahoma, WB Jay was initiated into the Scottish Rite in 2003. He was enthralled by the grandeur of the Guthrie Scottish Rite Temple and the degrees that took place on that grand stage. Like all young Masons he did not possess the secret word “NO,” and found himself with speaking parts in degrees 9-11, 16, 29, and 32, and he loved every minute of it. He was also initiated into the York Rite and Order of the Eastern Star.

In January of 2007, he relocated to Newcastle, Wyoming and affiliated with Newcastle Lodge #13 where he joined the Lodge line and became WM in 2010. He relearned the degree work and language according to Wyoming Ritual and helped confer degrees throughout the northeast corner of the state. In 2008 he became a Noble of the Mystic Shrine in Kalif Shriners of Sheridan, Wyoming. His biggest achievement while there, was when he was recruited to the building committee. A Lodge Brother left some land for the purpose of the new Lodge building which was quickly commenced. Jay donated his labor for more than seven months to wire and act as owner representative during the build. The new building was opened in the fall of 2009 and the Cornerstone Ceremony took place while he was Worshipful Master in 2010.

He then moved from Edgemont when he was hired as a Maintenance Electrician at the VA Black Hills Medical Center in Hot Springs. He affiliated with Mt. View Lodge #161 in October 2012. He moved through the chairs in Edgemont and served as Worshipful Master of Mt. View Lodge #161 from 2017 to 2021 and is now their Secretary. His accomplishments include spearheading fund raisers to support two successful Child Identification events in the Edgemont School with another one scheduled for April. He, with assistance of his Brothers, replaced the electrical service and installed cove heaters in the basement to modernize their building. WB Jay has also affiliated his membership with Naja Shrine of Rapid City, South Dakota and in 2018 affiliated with Harmony Lodge #110 in Hot Springs. Recently he affiliated with the Valley of Deadwood Scottish Rite.

WB Jay became active in the District and State by travelling to surrounding Lodges to assist with Degree work and Rituals according to Grand Jurisdiction of South Dakota, and in 2014 was appointed District 16 Education Officer. In 2015 MWB Doug McFarland invited him to perform his “Ties and Duties” (On Yonder Book) at the formal opening of the Grand Lodge. In 2016, MWB Mike Rodman asked him to present his “Lodge Game” at the Grand Lodge Leadership Training in Oacoma. He volunteered during “The 75th Re-Dedication of Mt. Rushmore” to welcome and escort visitors at the Memorial that year. In 2017-18, he received the “Master Builder Award” from MWB Yancey Smith and was appointed to Grand Lodge, Board of Custodians of the Work. In 2019 he volunteered for the Conference of Grand Masters of North America. Later in 2019 MWB Harold Ireland asked him to perform the “Ragged Old Flag” at the 130th Cornerstone rededication of the Joe S. Kern Building at the State Veterans Home in Hot Springs, SD.

In 2021 MWB Jason Swindler appointed WB Jay as Chairman of the Board of Custodians of the Work. He has spearheaded several events for Custodians and has more on the horizon. At the 2021 Grand Lodge the Custodians provided a breakout session to cover the basic knowledge and skills necessary to perform degree work and become a Ritualist. In late summer he conducted a School of Instruction in Spearfish and one in Pierre. In 2022 the schools included Rapid City, Winner, and Mitchell with two scheduled for Aberdeen and Yankton. His biggest accomplishment was the successful Ritualist Festival held in Quinn/Wall in October. Jay has devoted his life to studying, learning, teaching, coaching, and developing talent of all ages. Weather it is on the baseball field, the wrestling mat, or in the Lodge room he enjoys the journey and challenge of improving as a group. WB Jay has a love of Masonry, a passion for Ritual, and a desire to serve the Craft.

WB Jay has been nominated by Mt. View Lodge #161 in Edgemont and Harmony Lodge #110 in Hot Springs for the position of Junior Grand Warden for the Grand Lodge of South Dakota.