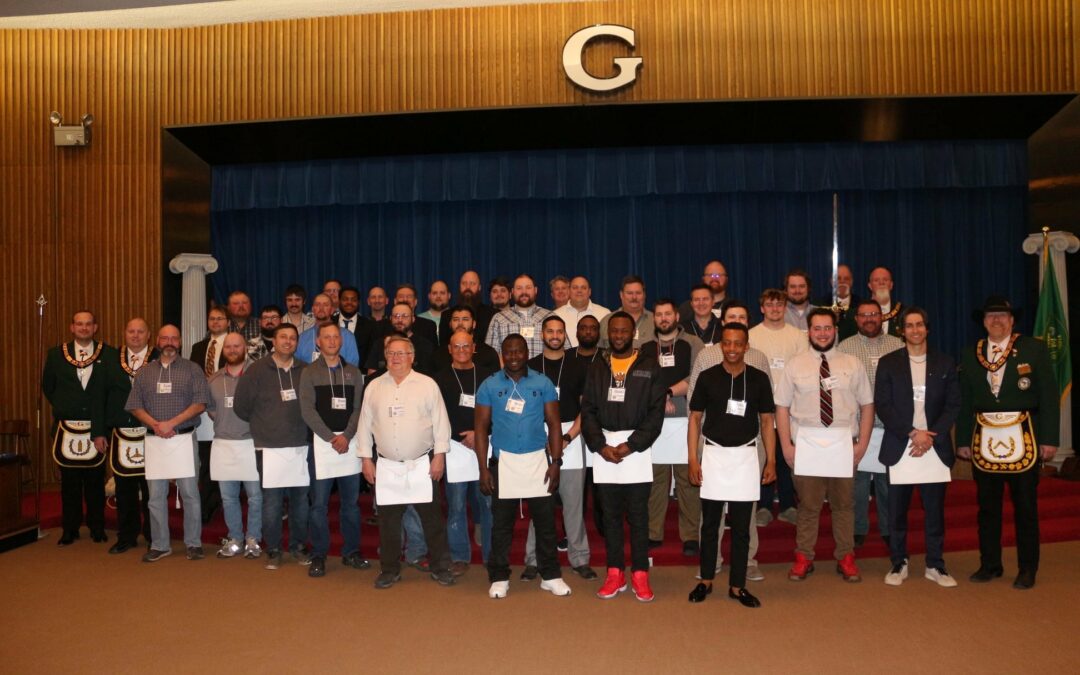 Masonic Festival 221 is in the books! April 1 and April 2 at the Sioux Falls Masonic Center over one hundred Brothers convened on the two-day event to raise 39 new Master Masons from 11 different lodges!

The idea for a Grand Lodge sponsored degree event was discussed during MWB Jason Swindler’s term and with Covid, planning such an event made it difficult. During the Fall of 2021 the Board of Custodians under the coordination of Worshipful Brother Jay Darrow held a Ritualist Festival in Wall. This event was a success and the desire to showcase excellent Ritualists along with an opportunity to give new candidates a first class experience gave thought for future Festivals and continuing to build on the Festival events.

Also during the Fall of 2021, the Grand Master was inspired to create a group of leaders that would consist of all of the leaders of the statewide Masonic Family Concordant Bodies. The concept was to have this council work together and discover ways that all the different Masonic Bodies within South Dakota could collaborate on Membership to strengthen the Masonic Family as a whole.

In December of 2021 it was discussed of having another Festival in a different city. It was thought this event was locked in but by the time the New Year rolled around it was discovered that event wasn’t going to materialize. Just after the first of the year the idea for the Masonic Festival 221 was born! The concept was an event that would build on the success of the Wall Ritualist Festival together with the efforts of the leaders from the Concordant Bodies to create an event that would truly celebrate Masonry in South Dakota! The event was named the Grand Lodge Masonic Festival 221. In anticipation of future events the numbering of the Festival signifies the #1 Festival in the year 2022. The setup of the event was to showcase the best Ritualists, offer courtesy degree work for any lodge in the state, and to gather as the South Dakota Masonic Family for meals. The goal of the event was to offer degree work that would give any of the candidates the same experience for all as it would be for one candidate. The planning committee needed to get creative to make that happen!

The schedule for the event was developed to accomplish as much Masonic fun as possible! The degree times were set given the projection at the time for the number of candidates we would be having during the Festival. Next with the help of the Custodians time was set for Schools of Instruction before each of the degrees. The Schools of Instruction provided an opportunity for visiting Brothers to review the current South Dakota Ritual and take back what they had learned to their lodges in an effort to further sync our Ritual Work. Every great event of course comes with food! The Concordant Bodies stepped up in a big way and offered to sponsor the various meals need over the course of the two-day event. These meals would be free of charge to the candidates, Ritualists, and visiting Brothers. For their generous contributions for the event The York Rite Masons, The Scottish Rite Masons, The Shrine Masons, Eastern Star, and DeMolay would have a chance to talk about their various organizations and highlight the benefits of being a member of their part of the Masonic Family.

The planning committee as previously stated certainly had to get creative. Ultimately eleven different lodges would submit candidate registrations for the event. As the logistics for the event progressed the number of candidates were ever changing. Several different variations of the logistics playbook were developed as the lists from the lodges were coming in. At a minimum it was exciting for the planning committee to gather and discuss how to make this experience the same for all as it would be for one. Several Brothers stepped up to divide and conquer. A backstage crew was established to work behind the scenes to make sure the right things were in the right place at the right time. Several Brothers wanted to go above and beyond for degree props and supplies and the backroom of the Masonic Center was gone through extensively to find degree supplies that haven’t been used in quite awhile. This proved to be a great addition to the Festival! The final logistics playbook was set a week before the event as the final candidate numbers from the various lodges were received.

The Masonic Festival 221 had a lot of expectations. It was the desire to accomplish many goals during the event. The table was set for a great weekend of Masonry! The weather turned out great and didn’t add any extra challenges for the event. We needed to have both sets of the double doors wide open as Brothers from all over the state flooded the Masonic Center. It was truly exciting to see that many Brothers attending in support of the Masonic Festival! There were certainly challenges with organizing and conducting this many candidates to get as much of the full experience as possible. This will be used to continue to build on the next one. Overall, many Brothers went above and beyond to jump in and help out to make the Festival work and a great success!

A special thank you to all of you Brothers that went above and beyond during the Festival to step in and help out!

A special thank you to the Custodians for the Schools of Instruction!

A special thank you to the York Rite Masons, Scottish Rite Masons, Shrine Masons, Eastern Star, and DeMolay for sponsoring the delicious meals!

A special thank you to the Widows Sons Masons for securing and tiling the doors during the entire Festival!

A special thank you to members of the Trestle Board for taking a role and making this a wonderful experience for the new candidates!

A special thank you to the eleven different lodges for bringing Candidates to the Festival. Each lodge bringing their charter to display was a very nice touch!

A special thank you to the Stage Crew for all of their hard work and sweat during the Festival!

A special thank you to the Conductors (and Super Conductors) for conducting the candidates!

A special thank you to the Planning Committee for all their work before the event, the hundreds of messages and emails, the late nights, the Saturdays, and all of their time organizing this event.

And finally, a special thank you to all of you Brothers that supported the Festival and the efforts of the crews above. The Festival was certainly not just about one person or one group, it was about meeting on the level to celebrate Masonry in South Dakota! The Masonic Festival created momentum to work together as the South Dakota Masonic Family to benefit all. Most Worshipful Jeff VanCuren summed it up perfectly at the conclusion of the Table Lodge that no matter which part of the Masonic Family you commit your time if we support the efforts of the rest of the Masonic Family we can accomplish so many great things.